Predators can be defeated

8. Stay alert! Watch out for your great enemy, the devil. He prowls around like a roaring lion, looking for someone to devour.9 Stand firm against him, and be strong in your faith. Remember that your family of believers[a] all over the world is going through the same kind of suffering you are.

Have you ever had a moment in life, when it seemed as if life seemed to go from bad to worse? During this Coronavirus pandemic, a recent discovery was reported of a giant hornet from Japan that has made its way to the United States. Known as the Murder Hornet, it relentlessly can destroy tens of thousands of honeybees. Bees are decapitated with a slice of its jaws. They are even known to sting through bee suits of humans. If that doesn’t make it fierce enough, the Murder hornet cannot be penetrated by the sting of its would-be prey. 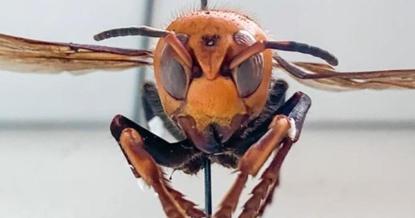 Although it appears to be the end for the American honeybee, there’s something you should know. In Japan, the honeybees who are under attack by the hornet have made some amazing offensive adaptions. When faced with an attack from the hornet, the honeybees do something amazing. Documented studies show that the honeybees come together to completely engulf the hornet, by forming a ball around it. At the same time, the bees vibrate their bodies which creates a heat that the hornet cannot tolerate, yet the honeybees themselves are not affected. As a result of this counterattack, the bees literally cook the Hornet in defeat.

Perhaps the American honeybee can learn from the honeybee in Japan. Although they may not have had to use this method before, it is a natural offense built in them. How can you fight like the calm honeybee? I'm glad you asked.

Know your worth. There may be some dormant abilities in you because you do not feel challenged or threatened in life. Rely on weapons that work. Just because it seemed like a great plan for another individual does no guarantee it will work for you. Take a personal inventory. Get with like believers and don’t give up until you have defeated your enemy. If you don’t have enough help, call for backup.

God has put a natural defense and offense in us when we are facing attacks from the enemy. Find some friends who stand in agreement with you to take down the situation that is trying to take you. It may be a prayer team, your spouse, a close friend, or a small group. Get together, generate that fire, and defeat your enemy.

Nadia's Story
JOURNEY TO THE CROSS

This is an opportune time to discover the amazing contributions to our economy, technology and innovations by great people of color.  Support those who continue to practice inclusion and continue the fight against bias attacks and racism

What are you Reading? Men’s Edition New Podcast and Virtual discussion on latest and classic books. We also discuss some of the latest issues happening around here and around the world

Follow our event calendars for the next broadcast and upcoming events

There are no up-coming events